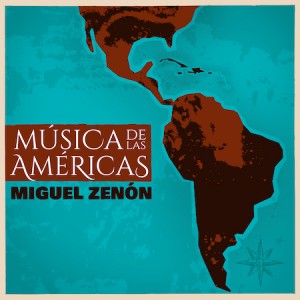 Saxophonist and composer Miguel Zenón hits us again with an album of groove-centric music packed with meaning, soul and ambition. On Música De Las Americas, Zenón brings in his long-standing and amazing quartet to tackle the idea of how the Americas were before European colonization and how it developed thereafter. The Puerto Rican alto saxophonist developed material for this eight-tune, beautifully paced recording after reading a number of histories during the pandemic. According to a terrific article in the November issue of DownBeat, Zenón dug into books like Robiou Lamarch’s Tainos y Caribes, Laurent Dubois’ Avengers of the New World and Andy Robinson’s Gold, Oil and Avocados. The first cut, “Tainos Y Caribes,” sets the tone for this brilliant recording. Named for the early aboriginal cultures of the Caribbean, the tune glides over a clave-driven beat laid down by drummer Henry Cole and bassist Hans Glawischnig, leaving Zenón and pianist Luis Perdomo a warm rhythmic bed to glide over. Here Zenón especially shines with rapid-fire heat. “Opresion Y Revolucion” aptly serves up the pain and chaos that the Western Hemisphere has endured for centuries. “Las Venas” takes its title from Eduardo Galeano’s Las Venas Abiertas De America Latina (The Open Veins Of Latin America), translating a book about the economic history of Latin America — one that has its fill of exploitation from the U.S. and Europe — into sensational instrumental music. Perhaps the album’s most touching moment comes from “American, El Continente,” a slow, brooding tune with beautiful soloing by Zenón and bassist Glawischnig. Often, improvisors are schooled to be able to sing the lyrics of a song before performing it on on their instrument. Here, Zenón and company turn that into “know the history.” The record delivers even more power with the addition of masters Paoli Mejías on percussion, Daniel Díaz on congas and Victor Emmanuelli on barrel de bomba, especially on the closing tune, “Antillano.” While it all sounds like heavy stuff, Música De Las Americas remains an incredibly uplifting listen. Zenón delivers something so rare: music that makes you think and even want to dance.