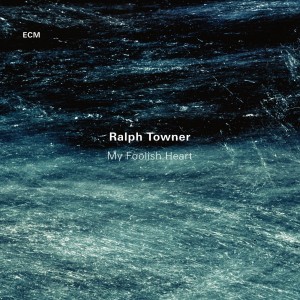 My Foolish Heart is the first solo album from guitarist Ralph Towner in a decade. What distinguishes this solo journey is the way it hinges on the spirit of Bill Evans, even if what surrounds that classic Victor Young/Ned Washington title tune is decidedly from the pen and world of Towner.

“Pilgrim,” like many of Towner’s compositions played on classical guitar, sounds, well, kind of classical, the stage here being set with a slightly searching melody that doesn’t provoke but also doesn’t inhibit. “I’ll Sing To You” sings, each string of Towner’s classical guitar acting as separate voice. Again, pulse is not a major ingredient; it’s the guitarist’s quiet inflections and massaging of his melody that suggests time standing still.

The title track is played as a jazz musician would play it, though Towner plays it on his classical guitar. The variations on the theme are subtle, the melody dominant even as the guitarist works his own magic, as if time-traveling back to a time when he was first inspired, enthralled by Evans’ recording of the song with Scott LaFaro and Paul Motian. It’s delicate, like something precious to hold but not toss around casually. And while “Dolomiti Dance” feels like an exercise in spirited playing (and chops), it offers a rare bounce to an otherwise reflective outing. DB