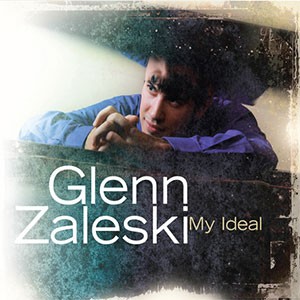 Glenn Zaleski knows the value of keeping things simple. When asked earlier this year about improvements he made in 2014, his answer had everything to do with distilling his sound. “When I simplified and played less, my playing sounded more full, infinitely clearer and overall more effective,” he said. “I’ve been amazed at just how little I need to play.” My Ideal, Zaleski’s debut as a leader, is a product of that full sound and infinite clarity. Like the lyrical, soft-spoken pianists of previous eras—Bill Evans, Vince Guaraldi—the Boston-born, New York-based pianist is capable of painting big pictures with small, deliberate strokes. From the very beginning,My Ideal finds the pianist exhibiting qualities of a master pointillist. His touch is marked by confidence and resolve—powerful, but not overbearing—and his phrasing is constantly attuned to structure and story. A prime example is the album’s title track, played so tenderly, and with such respect for melody, that one can practically hear the lyrics hanging in the air. His arrangement of “Body And Soul” is similarly understated and exposed. In an unaccompanied introduction, Zaleski explores the song’s chord changes with delicate solo lines and smooth chord modulations. Barely recognizable at first, the melody takes shape through gentle intimations, emerging fully formed only at the song’s conclusion. On an arrangement of the Charlie Parker classic “Cheryl,” Zaleski demonstrates the same capacity for storytelling. He begins the song with a bouncy rendering of the head, and then cuts gracefully to a chord-heavy blues solo. It’s a perfectly timed leap that illustrates Zaleski’s gift of having the right thing to say at just the right time. A simple concept, but sublime in its execution.