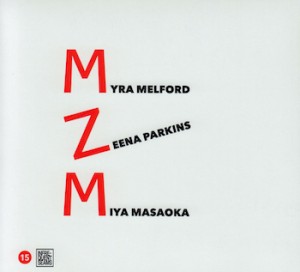 Three of the most inventive improvisers on the creative music scene joined forces for the first time on MZM, a 2017 album now seeing its reissue. The result is always compelling, often surprising and swings effortlessly between the wildly manic and deeply meditative. Though electroacoustic koto player Miya Masaoka is the only artist to have actually performed with live insects, the natural world inspires the titles and soundscapes of several tracks. Beginning with “Red Spider,” a lighthearted meet-and-greet where the trio weaves a web that draws listeners in, MZM gets stickier as it progresses. The head-on collision of “Bug” foreshadows the penultimate track, “Ant,” on which the tiny titular insect is depicted through the force of Masaoka’s wildly percussive koto, the eruptions of Zeena Parkins’ harp and Myra Melford’s machine-gun keyboard clusters. But MZM is hardly earthbound, soaring to “Saturn,” surrounded by rings generated by Parkins’ synthesized harp, and creating its own DNA “Spiral” with toy piano and Masaoka’s bowed 21-string bass koto. This reboot gives a well-deserved encore to the power of MZM and these three inimitable improvisers.