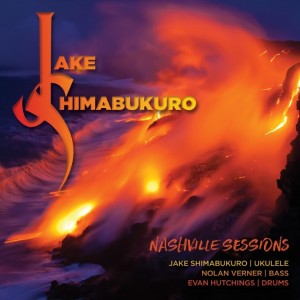 With each subsequent release, ukulele player Jake Shimabukuro takes another step away from being merely a YouTube phenomenon. Ten years ago, a video of him playing an instrumental rendition of The Beatles tune “While My Guitar Gently Weeps” went viral, and videos of his versions of other songs, like Queen’s “Bohemian Rhapsody” and Leonard Cohen’s “Hallelujah,” further extended his reputation as a marvelously talented Internet sensation. But the native Hawaiian had recorded many albums prior to filming that Beatles clip. Today, his discography includes dozens of titles. A one-trick pony he is not. His new album, Nashville Sessions, consists of all original material. It’s a trio disc recorded with bassist Nolan Verner and drummer Evan Hutchings. (Two of the 11 tracks include strings from Chris Carmichael.) This album definitely feels more influenced by rock than jazz, and Shimabukuro’s mastery of a variety of types of ukulele—tenor, baritone, soprano and electric—gives the program numerous sonic textures. He’s capable of crafting catchy ditties, New Age-flavored dreamscapes, delicate lines akin to classical guitar and crunching electric work that packs the punch of a Telecaster. An adventurer who is constantly seeking to expand the audience for ukulele, Shimabukuro offers diverse fare here, like “Kilauea” (which might appeal to prog-rock fans), “Blue Haiku” (a gentle breeze that will be nectar for fans of traditional uke sounds) and “Tritone” (which incorporates elements from a concerto for ukulele and orchestra composed by Byron Yasui). Discussing the new album, Shimabukuro said, “The interesting thing about using different sounds and effects—overdrive/distortion, tube preamps and a Leslie speaker cabinet—is that they make you play differently. You become a new person.” Fans will be happy to follow the old Jake on his new journey.