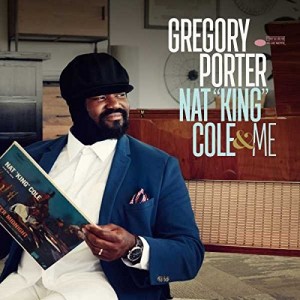 Gregory Porter has one of the most amazing singing voices you’ll hear on planet Earth. It can raise you to your feet with its power or help you sink into a chair and say, “Ah,” because it’s so darned soothing. On Nat “King” Cole & Me Porter leans to the soothing side of his instrument in paying tribute to, perhaps, his main influence as an artist. Porter has made it clear from the beginning of his career how much Cole means to him as an artist and as a person. He wrote the semi-autobiographical musical called, not surprisingly, Nat King Cole & Me, back in 2004. He has said that as a youth he often imagined Cole as the father figure he never had. If that sounds like a lot of pressure on this tribute, it is, but Porter doesn’t show it. He gracefully swings through a set of songs made famous by Cole as well as some originals that you can almost hear Nat sing. The program includes gems like “Mona Lisa,” “Smile,” “Nature Boy,” “L-O-V-E,” “Quizas, Quizas, Quizas” and “Sweet Lorraine,” all backed by the London Studio Orchestra with arrangements by the amazing Vince Mendoza. This is an ambitious, risky project that could have turned out sounding dated or stale, but Nat “King” Cole & Me delivers reward after reward. First, we get the reward of hearing one of our greatest living singers in a grand musical setting. Second, the band—consisting of Christian Sands on piano, Reuben Rogers on bass and Ulysses Owens Jr. on drums—swings beautifully. Trumpeter Terence Blanchard drops in for two great guest spots. Finally, the London Studio Orchestra brings an added dignity to the proceedings. Cole & Me has all the lushness of those original Cole renditions, but remains very clearly the work of Porter. This is not someone mimicking the King; this is a fully formed artist taking on that music with reverence, but with his own style. Porter’s tone is impeccable, his sense of time, sublime. One of my favorite cuts here is the Porter original “When Love Was King.” It’s a song that first appeared on his Blue Note release Liquid Spirit. Here, it’s presented as a dazzling, grand remake. In all, this is another fantastic contribution to the growing legend and discography of Gregory Porter.