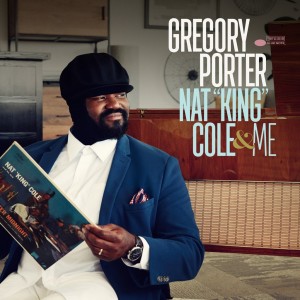 In his 20-year prime, riding high on the popular music charts, Nat “King” Cole was a sophisticated crooner—smooth enough to cross the color barriers that were still in place in the ’40s and ’50s. Gregory Porter has shown a lustier style on his previous albums, so this homage to Cole may not seem like an obvious next step in his nascent career.

The glue that binds Cole and Porter here is the strings of the London Studio Orchestra, in lush, soaring arrangements by producer Vince Mendoza, who also conducts the orchestra. Even so, it’s not always a smooth fit.

Where Porter prevails is in the moments when he lets his own instrument shine through. On “Miss Otis Regrets” he uses his operatic full voice to match the drama of the orchestra in the verse where the narrator details the mob’s lynching of the protagonist. Likewise, he makes the surging end of “Mona Lisa” sound like an aria. Conversely, he’s a model of restraint on “Nature Boy,” which allows the beauty of his tone to shine through. Less effective is “Ballerina,” which Mendoza soups up like one of the hard-swinging charts Richard Wess wrote for Bobby Darin, and the slight “I Wonder Who My Daddy Is,” a ballad associated with Nat’s brother Freddy.


Best of all is Porter’s own “When Love Was King,” a Cole-inspired composition that appeared on Liquid Spirit with spare accompaniment. Reprising it, Porter wisely puts the orchestra to excellent use; what was an intimate meditation becomes a powerful anthem.