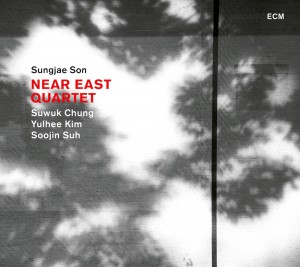 Saxophonist Sungjae Son and his cohort have been combining original compositions with traditional Korean folk songs since 2010. Their music has a surprising power on this concise album, which features three traditional pieces alongside five originals, blending them in a way that makes it impossible to tell which is which.

The bandleader’s horn rarely is the lead voice here, instead offering long tones in the background. When Son does take a solo, as on “Ebyul,” his notes are chosen with exquisite care, and his phrases are short and emotionally potent. Meanwhile, Suwuk Chung’s guitar alternates between shimmering harmonic clouds and staticky, distorted riffs. In some ways, these pieces seem to share a kind of universalist, non-specific spiritually with the work of Japanese saxophonist Akira Sakata.

The album’s closing track, “Jinyang,” is effectively two pieces. It begins with gentle chords, ritualistic toms and Yulhee Kim’s hushed vocals. But Soojin Suh eventually launches a barrage from behind the kit, Chung steps on the volume pedal, and the saxophonist and guitarist soar skyward, reaching doom-fusion catharsis.