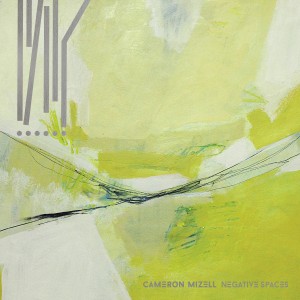 Cameron Mizell is a New York guitarist who has worn many hats in the jazz industry—as a recording artist, as a label insider for Verve Records, as a pit guitarist for Broadway musicals and as an accompanist for various Latin ensembles around the city. He made his recording debut in 2004 as the captain of an eight-piece ensemble, and in 2015 he released his first solo album, a splendid collection of originals titled The Edge Of Visibility. That album—recorded on Destiny Records, the label he manages—worked well to cut a striking figure for Mizell, effectively separating the guitarist from the pack. With Negative Spaces, his fifth album as a leader, Mizell assumes the role of the altruistic collaborator, rejoining his working trio for a program of painterly originals that uses sparseness and absence in artful, melodic ways. Digging in beside Mizell for this effort are drummer Kenneth Salters and keyboardist Brad Whiteley, with whom the guitarist recorded 2010’s Tributary. Together these musicians concoct a sturdy soundscape out of disparate styles. Rooted in an aesthetic of twangy Americana lines, swirling contemporary keyboards and blustery hard-bop grooves, the guitarist and his colleagues slide gracefully between emotional extremes. There’s edge and attitude to tracks like “Get It While You Can,” a slice of organ-heavy funk, and “Yesterday’s Trouble,” a gravelly country thumper. But interspersed throughout these tunes are “Clearing Skies,” with its beseeching keyboard ostinato, and the two-part title track, a slowly blossoming statement of grace and splendor. The album’s two arbor-themed compositions—“Big Trees” and “A Song About A Tree”—make another case for Mizell’s stylistic versatility. The former is grand and anthemic, a fireworks display accented by powerful cymbal splashes from Salters. The latter carries a sense of solitude and reflection, the way a lonesome traveler carries a picture of home. “Whiskey For Flowers”—written in honor of the annual exchange of gifts between Mizell and his wife—is a merger of the album’s collective influences: It’s got a touch of soft-edged rock, a splash of balmy calypso and a healthy dose of Frisell-esque folk. And, like much of this album, the song is a testament to the notion of saying a lot by speaking a little.