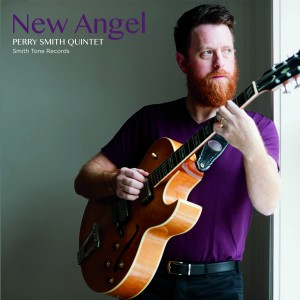 Guitarist and bandleader Perry Smith is at once urgent and laid-back on this third album, New Angel, the first recorded outing with his latest quintet.

The diverse moods on the album reflect Smith’s own boundary-straddling style, from the shifting tempos of the album opener, “Rise And Fall,” and the playful homage of “Monk’s World” (written to the chord changes of Thelonious Monk’s “Epistrophy”) to the impeccable phrasing of “Graceful Spirit.” Whether skirting fusion and funk or bursting with modern melody, Smith’s compositional style, musical direction and fret boarding hit that sweet spot somewhere between classic and experimental, improvisational and fine-tuned melody. The arrangements leave plenty of space for stretching out, while bassist Matt Aronoff and drummer Allan Mednard are the glue holding it all together.

Alive with spirit and purity, Smith’s recordings also are a bid to wage instrumental peace, an idea as old as jazz itself and as necessary as ever. The guitarist is as soothing as he is dissonant on “Lullaby For Freedom,” while the album’s solo sign-off, “Hope For Peace,” is an unmistakable plea for an end to the madness that awaits outside the studio door.