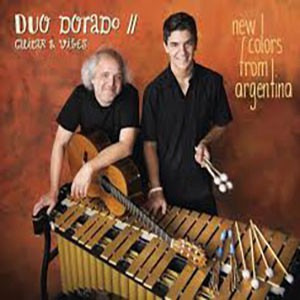 With so many talented vibraphonists on today’s jazz scene—including Stefon Harris, Warren Wolf, Jason Adasiewicz, Jason Marsalis and Chris Dingman—it’s a great time to be a vibes fan. One rising star to keep an eye on is Lucas Dorado, whose father is acoustic guitarist Carlos Dorado. The father and son have teamed up as Duo Dorado for the exquisite albumNew Colors From Argentina. Carlos—whose previous releases on the Acoustic Music label include Ciao Villa Sonja—is a masterful fingerstyle guitarist, and Lucas has inherited his father’s ability to add subtle harmonic coloration to a strong melody. One highlight here is Carlos’ composition “De Varese A Cabo Corrientes,” a beautiful track on which Lucas’ use of the sustain pedal creates a memorable, haunting effect. The only instruments on this gentle 11-song collection are acoustic guitar, vibraphone and occasional percussion, resulting in a cohesive disc. Eight of the tracks were penned by Carlos, including four brief songs titled “Sombras” that are interspersed throughout the program. Elsewhere, Carlos’ version of iconic Argentine folk musician Atahualpa Yupanqui’s “Punay” is a powerful, straightforward nod to his roots, delivered without vibraphone accompaniment. The duo offers a nuanced reading of the Gershwin classic “I Loves You Porgy” that sounds completely organic, as opposed to merely an exercise in novel instrumentation. One integral quality that Carlos and Lucas share is an appreciation for the space between the notes: These musicians eschew grandstanding in service of a hypnotic melody.