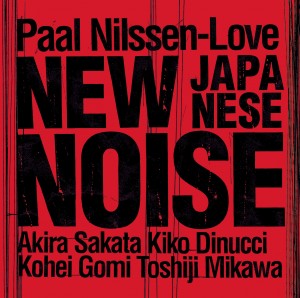 A fearless contributor to improvised collaborations with international scope dating back to the ’90s, drummer Paal Nilssen-Love continues a dizzying release schedule, this time with New Japanese Noise on his own PNL imprint.

The Norwegian drummer’s success might be tied more to his ability to find sympathetic players across an international landscape than it is cultural exchange. But the results, if acrid improv’s your thing, really are indisputable. For the live New Japanese Noise—a companion to the simultaneously issued New Brazilian Funk, an album dealing more with spontaneity than its title might intimate—the bandleader draws from an expansive pool of Japanese noiseniks, including reedist Akira Sakata and Toshiji Mikawa, a member of the all-spleen Hijokaidan.

“The Bone People” seems best at harnessing the history of Japan’s noise scene with some confluence of Mikawa’s troupe and Keiji Haino-esque guitar blurts, the latter courtesy of Kiko Dinucci, who appears here, as well as on New Brazilian Funk. Nilssen-Love’s background scuttle, the fetid dispatches of electronics and Sakata’s sneering edicts merge in a sweaty eddy of sound; opening salvo “Stiff Upper Lip Jeeves” works with similar reverberations. But it’s on “Eats, Shites And Leaves” that most listeners will find something akin to jazz, Sakata’s warbles leaning on light electronics and Nilssen-Love’s patter, before punky energy hijacks the proceedings.

This isn’t a new statement of purpose for anyone involved here, just seething seekers throwing down and releasing the recorded results, so listeners might feel the jolt of what went down at the 2018 Roskilde Festival in Denmark.