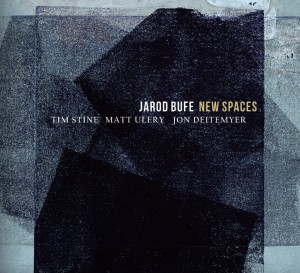 During the last several years, tenor saxophonist Jarod Bufe—long known in the Windy City for his expertise as a horn repairman—has developed a body of exquisite original compositions for the quartets and trios he leads at Chicago-area venues like FitzGerald’s and Elastic Arts. New Spaces is the debut album by Bufe’s quartet with guitarist Tim Stine, bassist Matt Ulery and drummer Jon Deitemyer, all frequent collaborators whose intuitive group aesthetic makes for the ultimate creative “space.”

Bufe’s sound has a solid, deeply resonant core that brings to mind the maturity and patience of seasoned tenor veterans. His use of tasteful vibrato and subtle dynamics adds lyricism to the melodic lines of his sophisticated compositions, which frequently steer the listener in unexpected directions en route to enlightening destinations. Bufe solos with fleetness and flexibility, maintaining poise and confidence while conversing freely with his bandmates and searching out ever-fresh ideas. Deitemyer is impeccable behind the kit. Stine serves as both sensitive accompanist and improvisational foil for Bufe. And Ulery, when not extracting gorgeous solo lines from the upright, lays down a pulse that’s felt as much as it is heard.

New Spaces conveys creative vitality through and through, and jazz listeners hungry for new content certainly will find satisfaction in this well-mixed, pristinely recorded collection of finely crafted tunes.