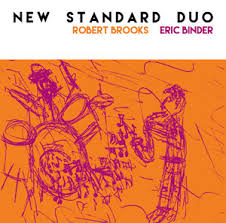 When it comes to jazz, who says melody and mystery are mutually exclusive? Certainly not the Illinois-based New Standard Duo, whose self-titled album from Ropeadope Records elegantly fuses explorations of the Great American Songbook with adventures into the Great Unknown. Part standard repertoire, part free improvisation, this duo recording by tenor saxophonist Robert Brooks and drummer Eric Binder combines the familiar with the foreign. That juxtaposition can make for a pleasantly jarring experience, for as soon as listeners think they have landed on solid musical ground, they are quickly whisked away into alien territory. Other times, the transition from melodicism to experimentation is a slow dissolve. The group’s version of “All The Things You Are,” for example, takes the famous melody and gradually unbraids the motivic strands, resulting in a loosened tapestry that is both a transfiguration and a tribute. With no chordal instrument to circumscribe the harmony, Binder and Brooks take great license to color outside the lines. Their sweeping rendition of John Coltrane’s “Giant Steps” feels rhythmically unfettered, a drastic alteration of the original, with its jagged, quick-step chord changes. In the hands of lesser improvisers, the tune could easily become squirrely, but Brooks and Binder, both of whom are currently pursuing doctoral degrees in jazz at the University of Illinois, retain the structural integrity of the song even as the walls come tumbling down around them. There are numerous pleasures on this six-track album, including a dreamy excursion through the standard “Alice In Wonderland,” which, with its jaunts, loops and switchbacks, re-creates the sensation of tumbling down the rabbit hole.