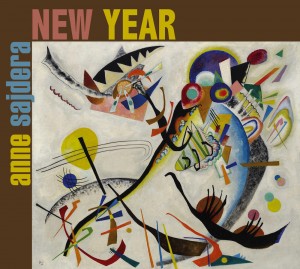 Fans of Anne Sajdera might assume that her new album would be a continuation of the Brazilian-flavored work she pursued with the band Pelo Mar and on her previous album, 2012’s Azul. However, New Year represents a new chapter for the pianist, who grew up in San Diego and was trained at the San Francisco Conservatory of Music. The album reflects Sajdera’s deep admiration for Herbie Hancock—both as a musician and a thought leader. As a youngster investigating jazz, Sajdera spent a lot of time listening to Hancock’s music, and his influence on her style today is evidenced by compelling, melodious compositions, such as “Treasure” and “Bright Lights.” In the album’s liner notes, Sajdera explains that New Year was inspired by Hancock’s call for intercultural dialogue through jazz, a message he returns to frequently as a UNESCO Goodwill Ambassador.

During a 2014 trip to the Czech Republic, Sajdera met trumpeter Miroslav Hloucal and alto saxophonist Jan Fečo, with whom she later collaborated for concerts in the States and for recording sessions at Fantasy Studios in Berkeley, California. The result is New Year, which includes five of Sajdera’s compositions, three tunes written by Hloucal and Fečo’s wondrous arrangement of a traditional Roma tune that he’s titled “It Depends On That.” At the core of much of the program is a quintet, with tracks alternating between the rhythm duos of bassist Dan Feiszli and drummer Jason Lewis, and bassist Gary Brown and drummer Deszon Claiborne. Other highlights include “Pictures,” a straightahead gem by Hloucal that features Sajdera’s propulsive, yet spacious, piano solo, along with powerful tenor saxophone contributions from guest Bob Mintzer; and Hloucal’s “Changeling,” a tune spiced with potent horn work by the composer and Fečo. Both players exude confidence and a selfless sense of serving the composition.

The album concludes with the only live cut in the program, a rendition of “Azul” that showcases Sajdera’s dazzling, authoritative right-hand work. The live recording was captured in Oakland, California, at Piedmont Piano Company, where Sajdera is set to perform Feb. 8.