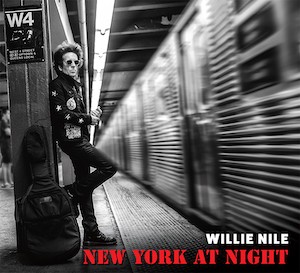 A startling crisis can add new, unexpected meaning to an existing work of art. Many albums recorded prior to 9/11 gained layers of significance that hadn’t been envisioned by their creators. This phenomenon was particularly acute for residents of New York City, and it has returned during the coronavirus pandemic. New Yorkers might experience an a-ha twinge when watching Steven Soderbergh’s 2011 film, Contagion, or viewing Jerry Seinfeld’s new standup special, 23 Hours To Kill. And Big Apple residents definitely will experience a jolt of recognition when listening to veteran rocker Willie Nile’s 13th studio album, New York At Night.

This sonic love letter to Gotham opens with “New York Is Rockin’,” a nostalgic sing-along with lyrics that celebrate the diversity of the city’s world-famous performing arts scene: “Frank Sinatra’s singing about the little town blues/ Baryshnikov is puttin’ on his blue suede shoes/ Bird is boppin’ down on 52nd Street/ The Ramones at CBGB’s got ’em on their feet/ Pavarotti’s singing up at Carnegie Hall/ Yeah, everybody’s swingin’, man, we’re havin’ a ball.”

Nile—a native of Buffalo, New York, who is a longtime resident of Greenwich Village—populates his lyrics with the names of New York streets and locations that nighttime denizens generally haven’t been prowling en mass during the pandemic (Avenue A, Avenue C, Bleecker Street, Broadway, the intersection of Park Avenue and E. 53rd Street).

Nile’s stock in trade is anthemic, straightforward rock, and tunes like the title track, “Lost And Lonely World” and “Downtown Girl” will appeal to fans whose music libraries include albums by the likes of Bruce Springsteen, David Johansen and Steve Forbert. The original ballad “The Last Time We Made Love” might resonate with listeners who cherished Nile’s interpretation of “I Want You” on his 2017 collection of Bob Dylan songs, Positively Bob.

When Nile took his band into the Hobo Sound studio in Weehawken, New Jersey, to record the new album, it’s clear that his goal was not to reinvent the wheel—or himself. He emerged with a disc that’s less rootsy than his 2006 album, Streets Of New York, and less political than his last outing, Children Of Paradise (2018).

The current dearth of live music in New York has turned Nile’s new album into a talisman of the recent past—when tourists and locals could wedge themselves into a packed club for a hot set—as well as a reminder that those days will return. And when they do, some of us will refuse to take them for granted.