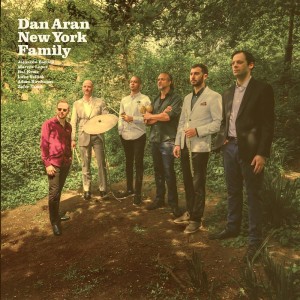 Israeli-born, New York-based drummer Dan Aran is a busy guy. He’s recorded in all sorts of contexts, including with players like pianist Art Hirahara and vocalist Bianca Wu. New York Family is his second album as a leader, following 2009’s Breathing.

The music here is a unique blend of jazz, Latin rhythms and Middle Eastern melodies, each track seemingly capable of taking the album in a new direction. The longest piece by far, the 11-minute “Jaxter And The Shark,” begins with a pulsing blues groove and forceful flute layered over percussion as Luke Sellick anchors it all with a rock-steady bass line. But at the six-minute mark, the music switches gears and pianist Adam Birnbaum introduces a Latin bolero melody, a turn that makes it feel like an entirely different piece. The very next track, “Gits,” begins with an extended oud intro, and becomes a duo for oud and piano, with just enough slowly swaying bass and drum action underneath.

In addition to original pieces by Aran and flutist Ital Kriss, the album includes versions of standards “Hello Young Lovers” and “Like Someone In Love,” Mal Waldron’s “Soul Eyes” and Horace Silver’s “Peace.” With the exception of the Silver selection, these mostly are piano trio performances, with maybe a little percussion here and there, demonstrating Aran’s facility with swing and soulful grooves. But what makes New York Family such a fascinating record is the way it combines traditions in an utterly unaffected, everyone-living-side-by-side manner, perfectly evoking the titular city’s atmosphere.