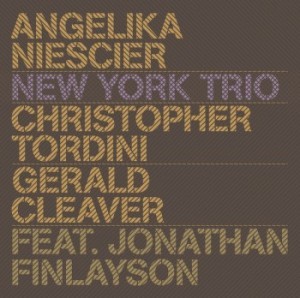 Perpetually in good company, alto saxophonist Angelika Niescier is adding to a run of Intakt albums with her latest disc, New York Trio.

Across three consecutive recordings, bassist Christopher Tordini has been a constant companion, helping to provide Niescier with a versatile rhythm section that’s either been rounded out by Tyshawn Sorey or Gerald Cleaver, who’s behind the kit on this newest set. Working in a chordless troupe here, as well as on 2018’s The Berlin Concert, grants the reedist unsparing freedom to roam, and the berth to examine and re-examine a pair of compositions on each album, while also interspersing a handful of new confections.

After opening last year’s live disc—which according to New York Trio’s liner notes actually was recorded after this studio date—with two performances that might drown out some rock acts, a mathier take on “The Surge” announces this disc’s arrival.

“I was [excited] to include them in a different environment,” Niescier recently told DownBeat while chatting at a Cologne cafe. “I think I cut [the introductorily passage of ‘The Surge’] for the live performance, because we had so little time to rehearse, and included the whole thing [on the studio version]. And ‘5.8,’ I think I wrote a different solo section. I was like, should I do this? Then I was like, fuck it, yeah. It was such a different energy.”

It’d be easy for Niescier only to spotlight her burly approach to alto, augmented on New York Trio by trumpeter Jonathan Finlayson, and come to each composition with a stormy fervor. But for “Ekim”—its melody borrowed from Turkish composer Nazife Güran—the bandleader and Tordini bend, blow and bow quietly, Finlayson weaving in lines with only minimal chatter from Cleaver. Programming “Push Pull” as the next track—one where the drummer leans into a groove more than anywhere else on New York Trio—might just be a satisfying accident, pointing out the bandleader’s various, contrasting and erudite approaches to composition. But it’s just as likely a clever and playful move, again flashing Niescier’s wit for a growing Stateside audience.