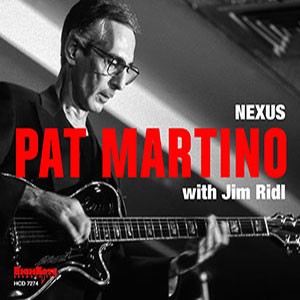 If you really want to hear two musicians communicate, listen to them in a duo setting. Solo performances are great, and trio recordings can mesmerize, but there’s nothing like watching two jazz artists hold a musical tête-à-tête. WithNexus, a newly released duo recording from guitarist Pat Martino and pianist Jim Ridl, listeners get the rare opportunity to eavesdrop on an intimate dialog between two masters of their craft. Friends since the early ’90s, Ridl and Martino have an effortless rapport. Though their styles are different—Martino’s, soulful and percussive; Ridl’s sweeping and graceful—they are somehow the perfect match, individuals who combine to form a stronger, more vibrant whole. And while it is a joy to listen to Martino’s trademark licks alongside Ridl’s rolling accompaniment, the brightest spots on this album are when the musicians’ styles bleed together. It happens on the Harold Mabern tune “The Phineas Trane,” when Ridl’s bouncing piano riffs begin to sound unmistakably like Martino’s bluesy guitar lines, and also on the touching ballad “Sun On My Hands,” in which Martino adopts Ridl’s slow, cascading phrases. Other tunes are noteworthy for their compositional originality. “Country Road,” a bright and tender pop ballad, is beautiful in its simplicity. “Interchange” (originally recorded by Ridl and Martino on a 1994 album of the same name) is like a blues heard through a dark, smoky prism. This album also marks the recording debut of Martino’s now-famous arrangement of “Oleo,” on which he plays the chorus over a minor vamp instead of the traditional “Rhythm” changes. Nexus is a must-have album for any Martino fan, a musical conversation we’ll be talking about for years.