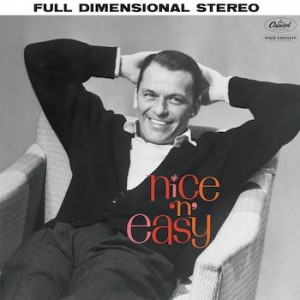 In these troubled times, a classic album of Frank Sinatra love songs might be the ultimate sonic comfort food. Especially this album.

Nice ’N’ Easy was recorded in 1960 when Sinatra, then 44, was at the height of his vocal powers. No longer the carefree young crooner, his voice had deepened and matured, reflecting the agonies of his tempestuous six-year marriage to Ava Gardner. After releasing two ballad collections—No One Cares and Only The Lonely—featuring torch songs near-suicidal in tone, Sinatra wanted to record love songs with a lighter touch.

The newly minted title track, by Lew Spence and the young Alan and Marilyn Bergman, was the only medium-tempo number. Sinatra previously had recorded the other 11 songs, all classic ballads, for Columbia in the 1940s. Now, he intended to produce the definitive versions, with peak Nelson Riddle arrangements, this time in hi-fi and stereo. The 1960 versions are richer; the arrangements more modern, yet still timeless.

The new stereo mixes are breathtaking, and the bonus material is invaluable: Two session snippets illuminate Sinatra’s process in the studio, recording take after take with the full orchestra. There’s also an exquisite “The Nearness Of You,” the album’s original title track.

Riddle’s orchestrations, particularly his writing for woodwinds and strings, are a heavenly combination of romance, classical know-how and judicious use of jazz harmonies. If you don’t get goosebumps when Riddle’s strings start to soar beneath Sinatra’s vocal on “That Old Feeling,” check your pulse.