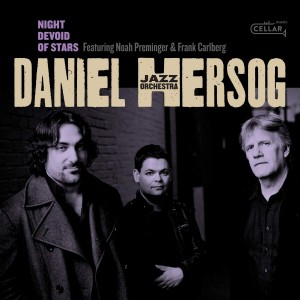 Hersog, also known for his vital voice on trumpet, wrote much of the music on Night Devoid Of Stars with two particular soloists in mind: tenor saxophonist Noah Preminger and pianist Frank Carlberg. Hersog’s highly distilled, historically informed compositions and arrangements not only serve as an expression of his own artistic individuality, but provide wide-open platforms for his band members to construct bold, towering improvisations that amplify the innate sophistication and adventurousness of the material.

Preminger, whose connection to Hersog dates back to their days as students at New England Conservatory, distinguishes himself on the catchy “Cloud Break,” the brooding ballad “Makeshift Memorial” and the straight-rock groove of “Indelible.” Carlberg, who was an influential NEC teacher for the bandleader, makes some of his strongest solo statements on the gospel-flavored, Keith Jarrett-inspired “Motion,” during a dramatic interpretation on the Jerome Kern standard “Smoke Gets In Your Eyes” and in the denouement of the album’s overarching title track. Other notable solo contributions come from trumpeter Brad Turner (on “Cloud Break”) and clarinet-doubling saxophonist Michael Braverman (“Indelible”).

Hersog’s orchestrations tend to exhibit a symphonic quality and exude a chamber-like vibe characterized by churchy brass choirs, unconventional instrumental pairings (usually involving various woodwinds) and an ever-present, Evans-like flow. The 16-piece Daniel Hersog Jazz Orchestra was booked to perform at this summer’s TD Vancouver International Jazz Festival—with Preminger and Carlberg onboard—but the event was canceled due to the coronavirus. Let’s hope listeners eventually get a chance to hear this remarkable Canadian ensemble take on these gorgeous new arrangements under Hersog’s baton in a live setting.