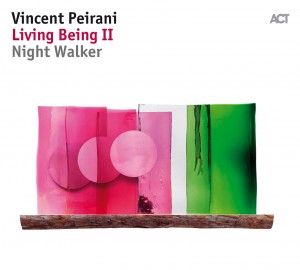 Just as Béla Fleck has done for the banjo and Grégoire Maret has done for the harmonica, French musician Vincent Peirani has emerged as an important advocate for the accordion. He gloriously illustrates that in the right practitioner’s hands, an instrument can break free of any pigeonholing and be effective in a diverse array of settings. Like Fleck and Maret, Peirani is interested in a variety of genres, not just jazz. Fans of classic rock might get lightheaded when glancing at the track list for Peirani’s Night Walker, which contains a suite that combines his original composition “Opening” with two Led Zeppelin songs: “Kashmir” and “Stairway To Heaven.” The album also includes interpretations of Henry Purcell’s 17th-century piece “What Power Art Thou” and Sonny Bono’s 1966 pop-noir tune “Bang Bang (My Baby Shot Me Down),” popularized by Cher and Nancy Sinatra.

The bulk of this album, however, consists of Peirani’s adventurous original compositions. Despite the leader’s variegated tastes, the program here feels cohesive, thanks to his gifted bandmates: Émile Parisien (soprano saxophone), Tony Paeleman (keyboards), Julien Herné (electric bass, electric guitar) and Yoann Serra (drums). This agile ensemble recorded Peirani’s 2015 ACT album, Living Being (which explains why the full title of the new album is Living Being II–Night Walker).

On “Unknown Chemistry,” Peirani and Parisien gracefully demonstrate how the timbres of the accordion and soprano sax can complement one another and blend to create majestic results. Parisien’s solo on “Falling” gives the subtle ballad a powerful emotional punch, while Paeleman’s aggressive improvisation on Fender Rhodes adds fireworks to the fusion-flavored title track. Peirani’s intoxicating lines on “Bang Bang” have a feel reminiscent of Astor Piazzolla, and on “Enzo” he plays the infrequently heard accordina, adding intriguing texture to a tune that would be appropriate for the soundtrack to a suspenseful thriller. As he showed on his 2016 duo album with pianist Michael Wollny, Tandem (ACT), Peirani is a sensitive musician, a talented collaborator and an artist whose work can surprise and delight in equal measure.