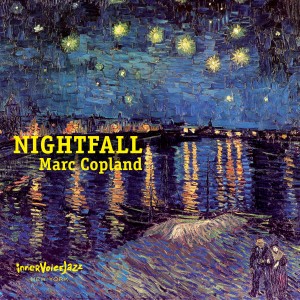 Originally titled “Reach Me, Friend,” Ralph Towner’s “Song For A Friend” suggests a musical connection every bit as deep as the one pianist Marc Copland has with the late bassist Scott LaFaro. LaFaro’s “Jade Visions” opens Copland’s Nightfall, its halting rhythms and subtle, cascading chords a perfect way to begin. And like “Jade Visions,” “Song For A Friend” is also a quiet, mournful meditation on, in this case, a friend. And both songs are geared around bass players, Towner’s with former Oregon bassist Glen Moore.

The balance of Nightfall is consistent with the moods established by those songs, Copland’s affinities with what might be called a lush romanticism a hallmark of his work over the years. Those years include time spent with another bassist, Gary Peacock, whose “Vignette” is visited here, the song’s gently flowing pulse and refrain in concert with the haunting melody.

And then there are Copland’s three original compositions, which, in a way, tell us why Nightfall was created. “Nightfall” follows “Jade Visions” in a most natural way, Copland’s pen a reflection of his ear for a good, simple melody and deliberate yet graceful construction. Likewise, “LST” and “String ing” are fairly unadorned melodies but ones that continue to enhance the mostly dreamy mood of the album’s setting.

In a sense coming full-circle, Nightfall ends with two by another Copland collaborator, the late guitarist John Abercrombie. “Another Ralph’s” (clocking in as the album’s longest number at more than 10 minutes) has a slight upbeat vibe to it even as it seems to ruminate around its modest theme. “Greenstreet” sends us out with some bona fide swing.