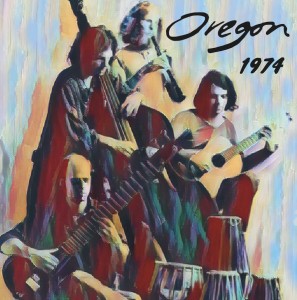 Fifty years on, Oregon’s music remains as singular. Other bands have tried variations on the fusion of avant-garde jazz with Indian, European classical and folk; none have done it with the same ingenuity or creative energy. Despite this, Oregon’s studio recordings (even classics like 1972’s Music From Another Present Era) could be ponderous. The group’s live albums, on the other hand, made up for that — the double-disc 1974 perhaps most of all.

That spark is all the more remarkable because the band, recorded here in a concert broadcast live on Radio Bremen, stretches out. The 14-minute-plus “Dark Spirit” is more than double the length on 1973’s Distant Hills. Yet where the studio version has dulled to a soporific by its six-minute terminus, 1974’s rendition is just warming up with Ralph Towner’s guitar and Collin Walcott’s sitar pushing each other to repeated crests.

Oregon can still get meditative. The concert-closing “Silence Of A Candle” is a chill-out feature for sitar; “Embarking,” a tune they never recorded otherwise, has a droning quality and raga-like passagework from Towner and oboist Paul McCandless. At the same time, though, “Embarking” is the first appearance of Walcott’s trap kit, and his brushwork provides a fresh snap to the tune.

It, and 1974 overall, is a definitive Oregon performance.