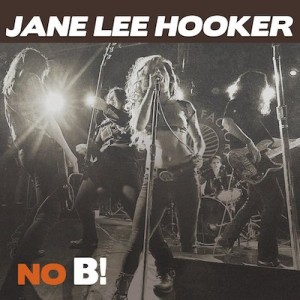 It takes nerve to name your group after one of the most revered guitar players in the history of the blues. Most of the time, the five women in this gang of bluesy rockers are up to the task, although they often substitute Hooker’s restrained approach with volume and attitude.

Before they began playing as Jane Lee Hooker, they put in time in a number of well-known, hard-to-categorize bands, including Helldorado, Nashville Pussy, The Wives, Spermicide and Bad Wizard. They bring that eclectic approach to the tunes they cover here, drawing influence more from the sounds of Muddy Waters and Johnny Winter than Hooker’s boogie-driven grooves.

Case in point: “Mannish Boy,” the Muddy Waters standard that’s been covered by countless bands over the years. Dana Athens sings Water’s original lyric and, but when she starts improvising on the song’s tag line—“I’m a man!”—she provides one of the album’s high points. You have to hear it for yourself.

The group take a less traditional approach to Johnny Winter’s “Mean Town Blues,” playing it at a blistering tempo and infusing it with an aggressive, punk rock feel. Gorin and Almazan take turns burning up the frets, while Houston’s double-time drumming keeps things moving at a breathtaking pace.

The quintet takes the same approach to “Wade In The Water,” a traditional African American spiritual usually played at a deliberate tempo with a gospel tinge. The twin guitar attack of Gorin and Almazan has enough heat to make the water boil. They slow things down on Memphis Minnie’s “Bumble Bee,” with Almazan and Gorin trading impressive solos that deepen the tune’s smoldering sexuality.

The album closes with “Shake For Me,” a Willie Dixon tune that was a hit for Howlin’ Wolf. The band doubles the original tempo and gives Gorin and Almazan room for another long, impressive guitar excursion, but it’s Almazan and Gorin that make the track a winner.