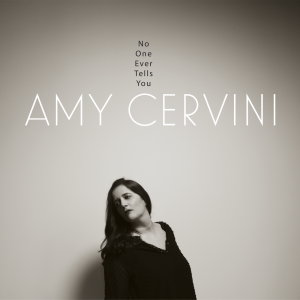 Singer Amy Cervini spikes her new album with unexpected twists that make it a gem. As the title of her 2014 album, Jazz Country (Anzic), implies, Cervini likes to mix her jazz with a rootsy, Americana flavor. The 10-song program on No One Ever Tells You includes fresh arrangements, often with slower tempos than the tune’s more famous renditions. Cervini’s version of “The Surrey With The Fringe On Top” transforms the happy tune from Oklahoma! into a nearly existential meditation. Rarely have those yellow wheels, isinglass curtains and bright sidelights been described with such a haunting delivery. Similarly, a molasses-tempo reading of “One For My Baby (And One More For The Road),” which features Hammond B3 organ work by Gary Versace, invites the listener to conjure the bar scene Cervini so carefully has crafted. While “Hit The Road Jack” frequently is offered as a barnburner, Cervini converts it into a lament.

The singer’s choice of material is just as remarkable as her ability to inject new energy into old tunes. There are hundreds of rock and blues tunes about a male rambler who tells a woman that he can’t stick around, because he’s got to hit the highway. And jazz singer Blossom Dearie (1924–2009) flipped the script on that tale with “Bye-Bye Country Boy,” about a touring female vocalist who bids adieu to a male fan. Cervini infuses the lyric with emotional power in a stellar performance, augmented by top-tier instrumental support from Versace and guitarist Jesse Lewis. The leader’s other excellent collaborators here are Michael Cabe (piano), Matt Aronoff (bass) and Jared Schonig (drums).

The program includes one Cervini original composition, “I Don’t Know,” a relationship tune with a potent twist in the lyrics: “I don’t know why I did it/ And I don’t know why you’d stay/ I don’t know how to fix it/ All I can do is say that I love you/ Then get down on my knees and pray/ And I don’t pray.” This tune, like the entire album, was expertly recorded by Cervini’s longtime producer, Oded Lev-Ari (who is also her husband). Lev-Ari’s overall production technique—combined with the microphone placement by tracking and mixing engineer James Farber—gives the listener the wonderful sense of sitting right there in the control booth as this superb music was made.