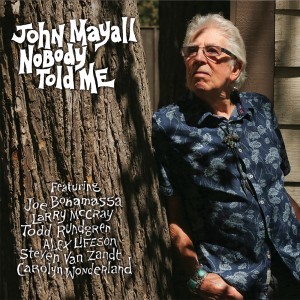 Counting live discs and compilations, John Mayall’s wracked up 86 albums, give or take. But wouldn’t a completist stop after, say, 30? More pertinent, is there a need to add to the clutter with Nobody Told Me, a new disc from the 85-year-old singer, songwriter, multi-instrumentalist and bandleader? The answer: Go for it.

For his most recent outings, Mayall’s keyboards, harmonica and vocals have been front and center. His 2018 live set, Three For The Road, was a stripped-down workout with Mayall accompanied only by his crack Chicago-based rhythm section. For Nobody Told Me, Mayall swings back to a full-ensemble sound. His vaunted ability to recruit star guitarists for various projects is on full display here, with a half-dozen six-stringers featured across 10 tracks.

The songs are well-served by the incessant wail of electric guitar, particularly the seven covers that start out the disc. Underappreciated blues-rocker Larry McCray takes full advantage of his moment in the sun, notably on Gwendolyn Collins’ “The Moon Is Full,” while Rush’s Alex Lifeson comes out punching on “Evil And Here To Stay.” Todd Rundgren’s fretwork eventually overpowers Conan O’Brien’s studio horn section on Little Milton’s “That’s What Love Will Make You Do.” And while Steven Van Zandt defers to Mayall with his in-the-pocket playing on “It’s So Tough,” Carolyn Wonderland adds impressive flourishes to “Like It Like You Do” and the glorious slow blues “Nobody Told Me.” It’s enough to leave Mayall fans panting for more.