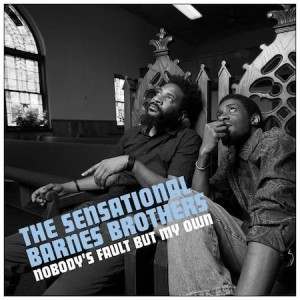 Fat Possum Records, the acclaimed, Mississippi-based label, has launched a new imprint devoted to gospel music: Bible & Tire Recording Company. The inaugural releases are a reissue of late-1960s and early-’70s material by Elizabeth King & The Gospel Souls, The D-Vine Spirituals Recordings, and an album of new recordings, The Sensational Barnes Brothers’ Nobody’s Fault But My Own.

Music is in the bloodline of the Barnes family: Chris Barnes and his brother Courtney are following in the footsteps of their father, the gospel singer Calvin “Duke” Barnes (who passed away on April 5), and their mother, Deborah, who once worked as a backing vocalist for Ray Charles. At one point, the couple and their four children performed as a group called Joy. Today, a group of relatives still records and performs under the name The Barnes Family.

All the material on Chris and Courtney’s new album was mined from the 1970s catalog of the Memphis-based label Designer Records. With the organ work of Calvin Barnes II or Jimbo Mathus as a frequent focal point, the group explores a soul-music aesthetic that will be familiar to devotees of the Stax label. The songs’ lyrics discuss praying, reading the Bible and devoting oneself to a higher calling. On “I Won’t Have To Cry No More,” George Sluppick’s drumming and Will Sexton’s pithy guitar riffs reinforce the vocals of the brothers, who traffic in the type of tight harmonies that sometimes come easily to family members. The crying pedal steel guitar of Kell Kellum on “Try The Lord” and the head-bobbing, foot-tapping infectious vibe of the rousing “Here Am I” have the power to appeal to believers and skeptics alike.

Fans who enjoyed the recent Aretha Franklin gospel-centered documentary Amazing Grace (filmed in 1972) and who now want to explore retro-leaning gospel music of today might want to check out this new work by The Sensational Barnes Brothers.