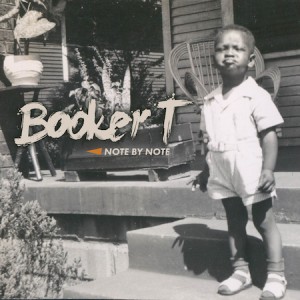 On Note By Note, Booker T. Jones chronologically catalogs his contributions to American music, moving from his early days at Stax through his solo career, his collaborations with Carlos Santana and Willie Nelson, and culminates in recent tunes with his son, guitarist Teddy Jones.

Opening with “Cause I Love You,” a bouncy duet originally recorded by Rufus and Carla Thomas with a 16-year-old Jones on baritone saxophone, Booker T. recreates its loping feel, sustaining its funkiness while subtly updating it. On “Born Under A Bad Sign,” which he co-wrote, the bandleader takes a medium-tempo approach, subtler and more personal than the iconic Albert King version. When Jones sings it, the lyrical substance of the song emerges and the blues get bluer.

With the MGs, Jones, Al Jackson Jr., Duck Dunn and Steve Cropper formed an integrated band at the height of segregation in the South. While British and American rock reached out to the blues for inspiration, the ensemble reached back, absorbing the ambience of the times, adjusting the music accordingly. The song “Time Is Tight”—a rare instrumental hit—demonstrates how soul, rock and jazz all can be the same thing. For the take on Note By Note, Jones fleshes out the arrangement, enhancing the intertwining grooves found on the original.

The two newest songs on the release—“Maybe I Need Saving,” a contemporary blues, and “Paralyzed”—find Jones collaborating with his son, continuing the tradition of tunes for the times in well-crafted settings.