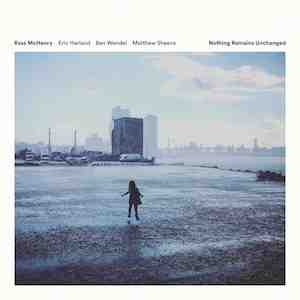 Ross McHenry’s Nothing Remains Unchanged features the Australian bassist’s collaboration with an esteemed crew, drawing from music that the bandleader wrote during a monthslong stay at the Leighton Artist Studios at Canada’s Banff Centre for Arts and Creativity.

Further establishing the composer’s reputation for crafting material drawn from a broad range of influences—jazz, chamber music and electronica—the album is influenced by the solitude and majesty of the environment, while also being a meditation on the past and present. “Complicated Us” sets the tone: Eric Harland’s shuffling drums, a supple bass line and Ben Wendel’s sultry saxophone float atop Matthew Sheens’ muscular piano in a composition that nods toward post-bop before exploding into chaos. “Woods” features an expressive piano solo within a composition that effortlessly toggles between breakneck swing and hushed, Zen-like mediation. And “Perspectives” offers incredible exchanges that find each player intuitively knowing when to lead, follow and push the composition as far as it can go. As a whole, Nothing Remains Unchanged is as meditative and oceanic as it is breathtakingly beautiful and turbulent.