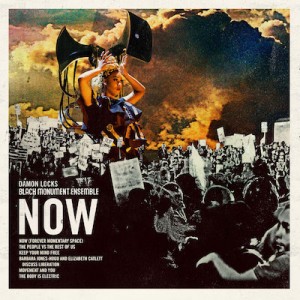 Recorded outside in a garden at the end of the last pandemic summer with the cicadas screeching into the mix, Now is an album of life and vitality, created from the need to commune without literal closeness. The session took two days, the same days the group learned the material. The songs pour out like an onslaught, and linger on the brain long after they’ve played.

Locks’ melding of electronics and samples feels like pulling from hip-hop as much as he’s pulling from the visual medium of collage. This is Black music intended to be interpreted as such, made at a time when it felt more necessary than ever in the United States to proclaim Black people’s distinctive and continual contribution to the fabric of the country.

Clarinetist Angel Bat Dawid and cornetist Ben LaMar Gay weave through these songs like the lamentations that echo the vocals, pushing themes through like a Greek chorus. Dana Hall on drums finds every corner of every pocket. But it’s Locks whose production on these songs makes this all feel like some greater art piece.