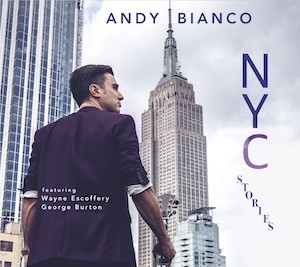 In New York, musicians continue to find inspiration along city streets and avenues. With generations drawing sounds from the five boroughs, finding a distinctive portrait has gotten harder. And that partially might be what hampers guitarist Andy Bianco’s latest album.

Far from aiming to be a comprehensive portrait or travelogue, NYC Stories aims at depicting a sense of triumph over adversity, which comes through on album opener “For Those Who Battle Demons.” Inspired by those in the guitarist’s life who have fought their addictions, the track gets off to a thorny start with Bianco’s stinging runs before a turbulent guest turn from saxophonist Wayne Escoffery calls down the heavens with a stormy middle section befitting the sound of the struggle. Escoffery returns alongside pianist George Burton to navigate calmer waters on “TSK” before kicking against the track’s contemplative pace with another fiery turn. That sort of dissonance runs through any view of the city, but such raw-throated upheaval goes missing through some of Bianco’s other ventures. The barbed “Drone Battery Slow,” though, accelerates into uncharted areas atop the drive of bassist Nathan Peck. New York might be the most written about city in the country, but Bianco still has stories of his own.