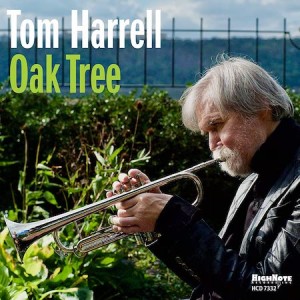 Tom Harrell is like a keystone species in the jazz musician kingdom: His music has a disproportionally large effect on his natural surroundings, just like the mighty oak tree. Over the course of his five-decade-long career, the celebrated trumpeter/flugelhornist has made a profound impact on the straightahead jazz community; the lyric beauty of his melodic lines and the concise, intense nature of his improvisations have served to benefit generations of advancing players and composers rooted in the traditional styles of swing, bebop, Latin and blues. His latest, an especially solid quartet session from late 2020 with pianist/keyboardist Luis Perdomo, bassist Ugonna Okegwo and drummer Adam Cruz, covers all that ground and more as four seasoned improvisers dig into the fertile soil of 11 Harrell originals that are so brilliantly crafted, they’re certain to benefit the jazz canon for decades to come. The lead track on Oak Tree, “Evoorg,” is quintessential Harrell: a medium-up swinger consisting of twisty bebop lines and the occasional chromatic bump played in a harmonic context of altered “Rhythm” changes. Harrell’s melodies – composed and improvised — feel incredibly familiar in their seeming effortlessness, until they take you by surprise and reveal just how distinctly different and original they are. “Fivin’,” one of three tracks featuring Perdomo on Fender Rhodes, is a jazz-funk outing with simple, even-eighth-note lines that never stray far from the tune’s monotonic opening statements. The title track, like the oak tree it’s named for, is a moderate ballad characterized by knotty lines, the crisp rustling of Cruz’s brushes and a fluttering solo in which the leader, completely uninhibited in his own habitat, flits from branch to branch and sings like a ruby-throated hummingbird on a mostly sunny morning. Harrell switches to flugel for more softly shaded tunes like the one-note samba groover “Tribute” and the airy, moody ballad “Shadows,” as well as on the somewhat aggressive track “Zatoichi,” where the quartet lets a constricted, repetitive initial declaration eventually fall apart to reveal meadows of airy free-improv. Harrell’s signature brand of bebop emerges whenever the spirit moves him, it seems; longtime admirers can get their fill with stimulating tracks like the deceptively titled, carefully arranged “Improv”; the angular “Archaeopteryx,” featuring a double-tracked Harrell playing in unison and harmony with himself; and the ever-optimistic “Love Tide,” reminiscent of beloved masterpieces of yore (like the Clifford Brown classic “Joy Spring”) with its subtle key-center movement, upbeat melody and snappy accents.