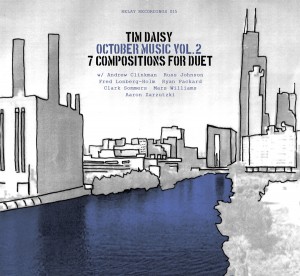 In times past, a musician had to double on different instruments if they wanted to get work. Nowadays you have to be a composer, producer and label head; it doesn’t hurt to be able to play a few instruments as well. Tim Daisy not only does it all, he has sustained his efforts over a couple decades of playing with a who’s who of Chicago-based and European improvisers and three-and-a-half years of running Relay Recordings. He is in it for the long haul.

This album gives clues to how he remains engaged. It includes seven duets that were recorded over a couple days in June 2016. The camaraderie and energy that he brings to his encounters with old pals like cellist Fred Lonberg-Holm and saxophonist Mars Williams affirm his acute responsiveness as an improviser as well as the compositional awareness he brings to wide-open situations. But it’s the encounters with newer players that best show Daisy’s versatility and fearlessness. “Radiant” cuts deftly between vertiginous turntable solos, guitarist Andrew Clinkman’s molten amp noise and pugilistic, rock-steeped duo passages. “Wires And Static” further evidences Daisy’s knack for managing quick changes within a piece.

The duets with newer acquaintances enable Daisy to challenge himself and what audiences expect from him without jettisoning the hard-won musical integrity that he has acquired over the years.