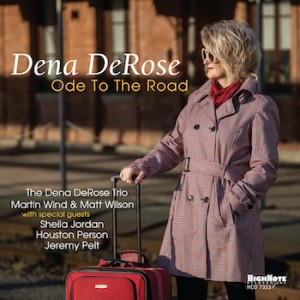 I became a Dena DeRose fan after absorbing the one-two punch of her Live At The Jazz Standard albums back in the early 2000s. The singer/pianist’s strengths were on full display, and while communication was considerable, agility proved to be the music’s key attribute. Ease was central to the success of both albums, and it’s an element her subsequent studio recordings could use a bit more of—including Ode To The Road. While its formality marshals certain victories, the spirit of DeRose’s improv instincts is somewhat muted.

The bandleader often has found ways to make well-worn tunes glow anew, but this time ’round, “The Days Of Wine And Roses” and “The Way We Were” have a ceremonial feel, with wisps of formula shrouding the gleam of the performances. Her connection with vocalist Sheila Jordan on “All God’s Chillun Got Rhythm/Little Willie Leaps,” as delightful as it might be, seems overly prescribed as well. When buoyancy does arrive, it’s front and center. Bassist Martin Wind and drummer Matt Wilson have been with the pianist for more than 15 years, and the trio’s combined chemistry can be sublime. “Nothing Like You” is a mix of grace and thrust that DeRose completely owns, while still allowing room for a brilliant romp by trumpeter Jeremy Pelt. But etiquette becomes an ally on “I Have The Feeling I’ve Been Here Before,” a break-up lament previously covered by Karin Krog and Carmen McRae that the singer emotionally amplifies with expert contours and nuanced delivery. It’s an unusual choice, and perhaps a reminder: DeRose benefits from avoiding the obvious.

Ode To The Road: Ode To The Road; Nothing Like You; Don’t Ask Why; All God’s Chillun Got Rhythm/Little Willie Leaps; That Second Look; Small Day Tomorrow; The Way We Were; Cross Me Off Your List; I Have The Feeling I’ve Been Here Before; A Tip Of The Hat; The Days Of Wine And Roses. (64:17)
Personnel: Dena DeRose, piano, vocals; Martin Wind, bass; Matt Wilson, drums; Jeremy Pelt, trumpet (2, 8); Houston Person, tenor saxophone (7, 11); Sheila Jordan, vocals (4, 6).