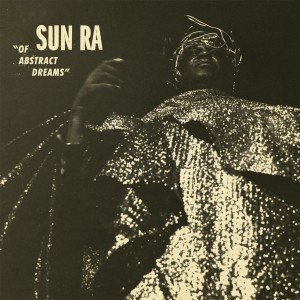 The recorded legacy of Sun Ra doesn’t need any bolstering, but this live set of four tunes makes for a quiet and surprisingly personal sounding album. The recording, issued in cooperation between Strut and Art Yard, finds Sun Ra performing in a nine-piece Arkestra, sans bassist. And while the lineup leaves a bit of a sonic hole in these works, it also grants the bandleader plenty of space to enunciate his musical vision.

The program opens with the frequently performed—but scarcely recorded—“Island In The Sun,” and this relatively small version of the Arkestra benefits from supplemental percussion being contributed by one-third of the band. Sun Ra is in fine melodic form as the tape fades out, and the improvised “New Dawn,” which follows, pokes around for its groove, hitting it only for a minute or two.

Captured live in the studios of WXPN at The University of Pennsylvania in Philadelphia in either 1974 or 1975 and remastered from the original tapes, Of Abstract Dreams concludes with what’s perhaps the first fully formed studio version of “I’ll Wait For You.” Tenor saxophonist John Gilmore reels back on a noisy solo, one of the freest moments the disc offers, as lyrics eventually roll around to supply the album with its title.

The four cuts here aren’t the freest or most abstract of the Arkestra’s performances, but this unearthed music further details a rich period in the ensemble’s life, one that influenced the direction of both the jazz and rock genres.