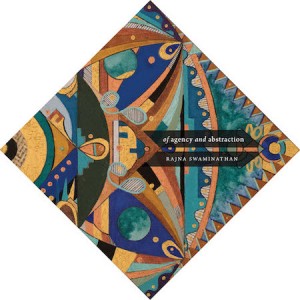 Rajna Swaminathan first learned the mrudangam—a two-headed drum that expresses the rhythms of southern Indian carnatic music——from one of her father’s teachers. And in addition to her developing knowledge of that classical music, Swaminathan began exploring her interest in jazz. So, in 2011, she formed RAJAS, an ensemble of New York collaborators that encompasses her various musical interests. Along with leading the ensemble, though, she’s worked with theater and dance troupes, while also pursuing a doctorate in Vijay Iyer’s Creative Practice & Critical Inquiry program at Harvard University.

The title of Swaminathan’s debut, Of Agency And Abstraction, frames her work as a reaction against structure and a sublimation of form that transmutes source material. While she’s clearly departed from the carnatic tradition, it remains an evident source of rhythmic and melodic inspiration for themes like the one that violinist Anjna Swaminathan develops on “Rush.” While she solos, guitarist Miles Okazaki shadows her, putting a brisk swing under her voluminous lines. Then he steps forward; the tune’s curves flatten and lines break, turning the music into something that’s as fascinating as it is difficult to define.

While there are plenty of passages where the playing takes wing, others feel more diligent than poetic. Swaminathan’s choice to recruit trumpeter Amir ElSaffar on several tracks offers clues about her ambitions. But it’s taken him years to figure out how to combine jazz with Iraqi maqams in ways that can’t be reduced to binary equations. Swaminathan still has a way to go before her music reaches such a level.