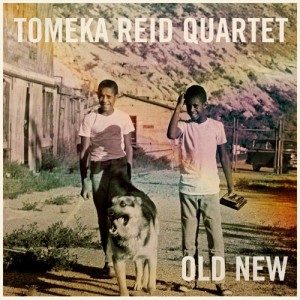 It’s hard to understand why cello isn’t played by more jazz musicians. It has tremendous range, both in terms of pitch and expressivity, is more suited to pizzicato playing than violin, has a smoother, richer arco sound than bass and can generate all sorts of interesting colors using harmonics. It’s easily one of the most versatile instruments around.

But don’t take my word for it—listen to Tomeka Reid. On Old New, she does a little bit of everything, from brisk bow work to plangent plucking, playing single-note lines, chords and squeaky bits of aural shrapnel. In fact, she does as much sonic shape-shifting with her bow and fingers as guitarist Mary Halvorson does with her pedals across the recording.

Even better, she and Halvorson do all this within a format that is, for the most part, straightforward and melodic. Take, for example, “Sadie,” a spritely, bop-style tune that finds bassist Jason Roebke laying down a solid walking line, while drummer Tomas Fujiwara maintains an amiable shuffle. Reid’s solo, played pizzicato, starts off as straightforward hard-bop, but moves steadily toward the blues as she uses microtonal finger-slides to emulate guitar string-bending. Halvorson, whose solo follows, takes pitch-bending in a totally different direction, using her pedalboard to make tones melt and drip like one of Salvador Dali’s clocks. In all, the track manages to be both straightahead and outside, a perfect realization of the title aesthetic.

It’s in that blend of modern and traditional that Reid and her quartet truly find their sound. “Niki’s Bop”—written for Reid’s mentor, flutist Nicole Mitchell—is built around a harmonically angular tune and features some fairly free interplay between Reid and Halvorson. But no matter how out-there the solos get, the music remains firmly rooted, thanks to the New Orleans swagger of Fujiwara’s drumming and Roebke’s groove-grounded bass. On the other hand, even though “Wabash Blues” is drenched in tradition, there’s not a blues cliché to be heard, thanks to the harmonic and technical audacity of the playing. But because the form is so easily understood (and the rhythm so solid), even the most nonlinear aspects of the solos go down easily.