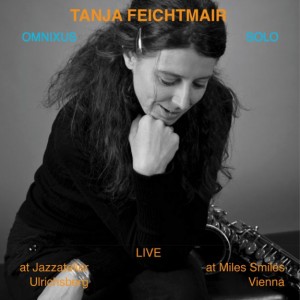 Free-minded alto saxophonist Tanja Feichtmair distinguishes herself from the improv pack by virtue of a presiding musical logic. She brings a sense of lyricism, melodic thinking and structural instincts to the catharsis of free play. And on her latest recording, captured live at two Austrian locations (Jazzateller Ulrichsberg and Miles Smiles), Feichtmair exhibits these admirable traits both in interactive mode—on a 33-minute piece in a quartet—and through six episodes of challenging, spontaneous solo invention.

Expanding the dimensions of her Trio Now! Group, showcased on earlier Leo recordings, the foursome here is a sensitive ensemble with a bold personality. On the album’s opening track, simmering intensity blends with supple gestures in the first passage of extended group improvisation, segueing into a section of sonic ethereality.

In the aftermath of the extended cut, Feichtmair applies poetically apt titles to the varied turf of her engaging six solo works. A self-defining airiness of structures and sonic material suits “Floating Substance,” while “Open Density” is an alternately expansive and explosive matrix. And on the final piece, “Frameless,” an initial blast of perpetual motion melts into pointillistic fragments—with a scattered, spacious and almost painterly character.

As evidenced here, Feichtmair commands attention for her ability to resist overblowing for its own sake, and harnessing a personal, emotional and sculptural improvisational voice.