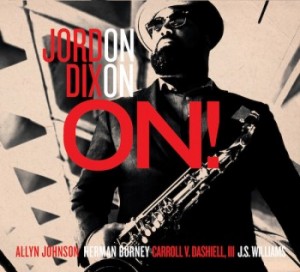 There’s something to be said for the sturdiness of blues, bop and ballads, and D.C.-based tenor saxophonist Jordon Dixon digs into each for his second leader date, On!

A Louisiana native, the bandleader took on the burden and distinction of serving in the Marines for 11 years, according to the album’s press notes. After an honorable discharge, he headed to D.C. to study music and hooked up with Allyn Johnson, a pianist and educator who’s prominently featured across the new recording. The pair’s readily apparent rapport really is what enables On! to swing so easily.

“What You’ve Done For Me,” a muggy ballad, features the pianist in an expansive mood, Johnson’s solo plunging from one end of the keyboard to the other. As the bandleader takes back the spotlight, Johnson’s support might come off as a bit too busy, but still manages to hit all the right spots. On “Flame And Friction,” trumpeter J.S. Williams contributes fanfares linking it all back to the bandleader’s home state, adding further historical context to a recording that’s utterly beholden to the past, but somehow refuses to seem stuffy, reserved or artless.

For On! to be Dixon’s second long-player and to come off as assuredly as it does seems to mean that even as the well-worn combo of blues, bop and ballads heads into its ninth decade, there’re still players creative enough to invigorate the concoction.