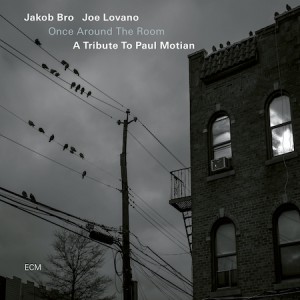 Guitarist Jacob Bro and saxophonist Joe Lovano co-lead a septet of players with strong connections to the late Paul Motian (and to each other) on Once Around The Room, a powerful, highly personal tribute to the influential drummer, who became a composer and bandleader relatively late in his five-decades-long career. Bro, who performed with The Paul Motian Band and appears on the 2005 ECM release Garden Of Eden, views Motian as a mentor whose inspiration helped lead him to develop his own voice; he conceived the project. Lovano, who plays mainly tenor here (with a bit of tarogato on one track), toured and recorded in Motian’s celebrated trio with guitarist Bill Frisell for three decades. Each co-leader contributes two Motian-influenced compositions to the program, which also includes a performance of the signature Motian piece “Drum Music” as well as a group improv (“Sound Creation”) that reveals the core essence of this heartfelt homage: Lead and follow at the same time, share the space and let the music carry you — a Motian-like mantra if there ever was one. Joining Bro and Joe in this international communion of kindred spirits are three bassists — Larry Grenadier and Thomas Morgan each on upright bass, plus Anders Christensen on bass guitar — and the drumming tandem of Joey Baron and Jorge Rossy. They all gathered in a Copenhagen recording studio in November 2021, on the 10-year anniversary of Motian’s passing at age 80, and arranged themselves in a circular formation that allowed for maximum interaction and ended up inspiring the album’s title. The music rains melodic lines, scribbles and skronks; it surrounds the listener with a rumbling, shimmering atmosphere generated by the fallout of Bro’s all-encompassing guitar effects and the collective thunder of the basses and drums. Moments of reflective calm marked by clearly defined melodies, harmonies and beats come into play as well, reminding us of Motian’s gentler side. Highlights include Lovano’s 12-tone composition “As It Should Be,” which makes a bold opening statement; Bro’s balladic “Song To An Old Friend,” where the guitarist’s intimate playing meshes with the basses in a foundation of perpetual-motion arpeggio over which Lovano carries the melodic line, strong and confident in the less-forgiving upper ranges of his horn; and “Drum Music,” which finds Lovano and Bro indulging in the sort of outrageous exaggerations and overstatements that Motian would likely approve of while Rossy and Baron are spotlighted both alone and together in percussion celebration. On the closer, “Pause,” a solemn mood settles the room as the players meditate on the legacy of Motian and the deep connections he forged with generations of jazz artists like themselves. Ultimately, after multiple trips around the room, the album ends in a peaceful place where the musicians can sense the joyful presence of their spiritual leader and share some final, lingering feelings of mourning for an artist who was a beacon of good vibes, bright ideas and raw enthusiasm.