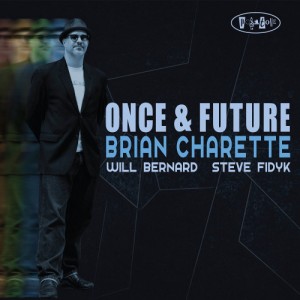 In every jazz lover’s mind there exists the perfect Hammond B-3 organ player. Whether that ultimate B-3 technician is Jimmy Smith, Charles Earland, Larry Young or Shirley Scott, certain defining parameters exist, regardless of the individual player.

But when it comes to Hammond B-3 mastery, Brian Charette wrote the book. Literally. His 101 Hammond B3 Tips (Hal Leonard) covers, among other topics, “funky scales and modes,” “creative chord voicings” and “cool drawbar settings.” Even more proof of his proficiency is heard on Once & Future, where Charette gives a master class in the many styles of B-3 playing, joined by guitarist Will Bernard and drummer Steve Fidyk.

Performing covers and original material, Charette’s B-3 touch is decidedly light, buoyant and playful. He brings his style to bear on hardcore grits ‘n’ gravy groovers by the acknowledged masters of the genre, as well as fare that puts me in mind of a cocktail party circa 1963. In that way, Once & Future acts as a calling card of sorts, a sampler of the many styles Charette and trio can bring to your next social function. Thankfully, there’s plenty of steam and smoke to balance the lighter punch bowl offerings.

The album kicks off with Fats Waller’s “Jitterbug Waltz,” delivered in groove-a-licious waltz-time goodness. Bubbly, swinging and steaming are apt descriptions here. The pace continues with Larry Young’s “Tyrone” (from 1965’s Into Somethin’), Bernard and Fidyk ramping up the temperature with able solos and fatback groove.

Charette’s sparkling “Latin From Manhattan” brings to mind Walter Wanderley as easily as it does Donald Fagen’s “Walk Between The Raindrops.” The trio knocks back Freddie Roach’s “Da Bug,” paints a dutiful rendition of “At Last” and stomps hard on Jack McDuff’s “Hot Barbeque.”

Other highlights include a beautiful, if jocular, version of Bud Powell’s “Dance Of The Infidels,” a note-perfect “Zoltan” as it appeared on Young’s 1966 masterpiece, Unity, and a cover of Wes Montgomery’s “Road Song.”

Both B-3 stylist and student, serious jazz scholar and glitzy entertainer, Charette is a burning soloist who understands the tradition of the Hammond B-3 as well its future—just as cerainly as he understands his place in that lineage.