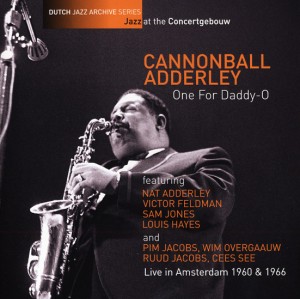 Volume 11 in the Jazz at the Concertgebouw series from the Dutch Jazz Archive documents two historic performances by Julian “Cannonball” Adderley in Amsterdam. The alto saxophonist was riding a wave of success and popularity when he brought his quintet with younger brother Nat Adderley on cornet, Victor Feldman on piano, Sam Jones on bass and Louis Hayes on drums to the world-famous Concertgebouw hall in November 1960 as part of a Jazz at the Philharmonic tour package. Working from a set list limited to four tunes because of time restrictions, Adderley and company get right down to business, delivering their soulful spin on bebop with passion and urgency. They stretch out on the opener, “Exodus,” a relatively new tune at the time, before launching into the more familiar funky blues “One For Daddy-O,” from Adderley’s 1958 Blue Note album Somethin’ Else. The set reaches a high point with the hit song “This Here,” by Bobby Timmons (the group’s previous pianist), which had been released as a single and had appeared on the acclaimed 1959 Riverside album The Cannonball Adderley Quintet In San Francisco. They close the set with an enthusiastic burn through Oscar Pettiford’s “Bohemia After Dark,” confirming that the then-emerging “soul jazz” sub-genre needn’t necessarily eschew speed nor completely abandon basic principles of bebop. The recording/playback quality on this first half of the CD is not great, but that doesn’t matter, as it’s the performances themselves—particularly Cannonball’s hard-charging improvisations—that make these tracks so noteworthy and enjoyable. Cannonball returned to Amsterdam in June 1966 for an appearance on Dutch VPRO Television with the highly capable European rhythm section of pianist Pim Jacobs, his brother Rudd Jacobs on bass, guitarist Wim Overgaauw and drummer Cees See. The resulting audio tracks—which are of much higher quality than the Concertgebouw recordings—are the final four tracks here. After starting with an informal blues, the group dives into the well-known repertoire of Cannonball’s hit “Work Song” and the standards “Stella By Starlight” and “Tune Up.” Although recorded more than five years after the Concertgebouw show, at a time when the leader had entered a new musical phase (marked by his collaborations with pianist/composer Joe Zawinul), these TV performances nicely complement the earlier tracks and help complete the picture of Cannonball in Amsterdam at the height of his creative powers.