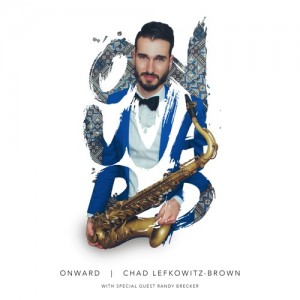 Saxophonist Chad Lefkowitz-Brown, a former DownBeat Student Music Award winner, plays with unbridled dynamism and a polished tone, qualities that make him an ideal accompanist for many of today’s forward-thinking artists, including Clarence Penn, Arturo O’Farrill, Amina Figarova and Taylor Swift (yes, that Taylor Swift). Though only 27 years old, the New York state native has already developed a mature voice, laying the groundwork for his singular style on the much-acclaimed 2013 disc Imaginary Manifesto. On his sophomore album, Onward, he presents a more refined account of his artistic vision, building a stylistic bridge between swing-oriented traditionalism and millennial pop savvy. That embrace of seemingly disparate material is part of the DNA of his latest disc, on which the saxophonist adds his own spin to songs as diverse as John Coltrane’s “Giant Steps” and Stevie Wonder’s “Isn’t She Lovely.” Whatever the vehicle, Lefkowitz-Brown plays with sturdy melodicism and bite, harnessing technical abilities that mask the difficulty of his wondrously intricate lines. He also gets down and dirty, with gut-wrenching blues riffs that erupt from his horn at just the right moments. Adding to the sonic swirl is nimble-fingered trumpeter Randy Brecker, who asserts himself on a pair of Lefkowitz-Brown originals. It’s a fortuitous pairing, Brecker’s lean, acrobatic solos meshing seamlessly into the tenor saxophonist’s high-energy aesthetic. Rounding out the ensemble are drummer Jimmy Macbride, bassist Raviv Markovitz and pianist Steven Feifke. The group displays a strong unity of purpose, coalescing with engines roaring around Lefkowitz-Brown’s soaring altissimo on the title track, and settling into still-water serenity on “The Nearness Of You.” The album ends with a take on Cole Porter’s “All Of You,” Lefkowitz-Brown infusing this Great American Songbook standard with modern touches and a relentless drive. It’s a practice that the saxophonist will no doubt share with pupils at the San Francisco Conservatory of Music, where he’ll serve as a faculty member—the school’s youngest—alongside fellow boundary-pushers Robin Eubanks, Matt Wilson, Julian Lage and David Sánchez.