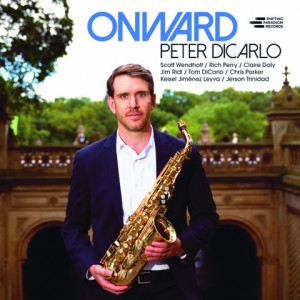 New York-based alto saxophonist and educator Peter DiCarlo makes an auspicious leader debut with the release of Onward. Bridging modern and traditional jazz styles, DiCarlo’s original compositions and arrangements are brought to life by a crack ensemble that brings together trumpeter Scott Wendholt, tenor saxophonist Rich Perry, baritone saxophonist Claire Daly, pianist Jim Ridl, bassist Tom DiCarlo, drummer Chris Parker, percussionist Keisel Jiménez Leyva and in various-sized instrumental configurations. The title track starts the album out on an energetic note, with a driving ostinato in the bass and piano establishing a firm foundation for the horn section. DiCarlo’s alto makes its presence felt during his solo on “Onward,” demonstrating strong showmanship and brimming with confidence. The mellow waltz “Feast In The Fuar” is a casually paced feast of improvisation served up by DiCarlo, Wendholt and Ridl. The winding bopper “Stepping Off” has Ridl flying over the keys in his solo, while DiCarlo steps a little further out into more adventurous harmonic territory and speeds up into a higher gear, spurring some spirited band interaction. “The Imposter” takes a fresh look back on the essence of tenor saxophonist Joe Henderson’s 1963 composition “Recorda Me” with its light drums-and-congas groove and a tenor solo by Perry that starts out breathy and gradully ramps up tin intensity. DiCarlo really lets it rip during his alto solo, pushing his range ever higher and revealing the gritty side of his tone. Warmth radiates from the horns of DiCarlo and Perry on the Parker-penned ballad “Arrival.” “Hint Of Mint” is a fun, uptempo hard-bopper arranged for alto and trumpet, Adderley-style. Things get a little breezier on a smooth, Latin-flavored arrangement of “There Will Never Be Another You” that gives the drums and percussion a nice combined solo spot. Soulful guest vocals by Jerson Trinidad, a funkified groove and four Stevie Wonder-style horns make Roberta Flack’s 1974 r&b hit “Feel Like Makin’ Love” feel like a bonus track, as it closes DiCarlo’s ambitious first album with a feel-good final statement.