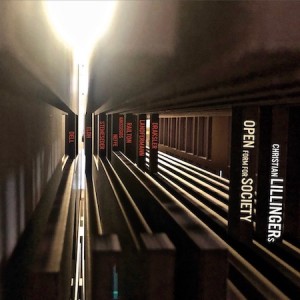 The nonet counts no horns in its ranks, but multiple strings, mallets and keyboards, which offer a broad and very specific selection of textures to Lillinger. “Piece For Up & Grand-Piano And Ringmodulator” opens the album with a burst of distortion reminiscent of Stockhausen’s electronic music, and then shifts to layers of soft marimba resonance and woolly synthetic noise.

The bandleader’s drums don’t even make an appearance until the second track, “Aorta,” on which quick piano, vibraphone and alternately filtered and unfiltered beats twist around each other like strands of DNA. The breakneck rhythmic barrage is reminiscent of 1990s drum ’n’ bass, but Lillinger doesn’t stay in one mode for long. His drums reinforce an insistent tattoo that gets passed between piano, marimbaphone and synth on “Titan,” and then engage in an intricate dance with the basses and electronics on “Sisyphos (CMS),” changing cadence measure by measure. And on “Mocking” the ensemble bounces between grooves, evoking the sound of a needle skipping across a record.

The music was fashioned through a lengthy process of solitary composition, collective improvisation, studio workshopping and post-production. But the point of all that work is to clear away anything extraneous, so that nothing gets in the way of perceiving the music’s intricate dynamics.