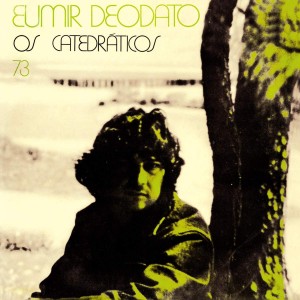 The reissue of keyboardist Eumir Deodato’s Os Catedráticos 73 is a head trip that will make synapses fire and hips sway.

The opening track, “Arranha Céu (Skyscrapers),” is dance-floor manna, fueled by the kind of awesome grooves that crate-diggers live for. Mixing Brazilian rhythms with the soul and grease of a classic jazz-organ trio, Deodato delivers a program that can, for 36 glorious minutes, make a fan’s troubles seem far away. Along with seven original tunes, the 11-track program includes a couple of choice songs by another Brazilian icon, Marcos Valle: the earworm “Flap” and “Puma Branco (The White Puma),” a slower tune that will motivate dancers who want to nuzzle. Among the 13 gifted musicians who played on these recording sessions are Azymuth drummer Ivan “Mamão” Conti and trumpet ace Marvin Stamm.

The program percolates at a brisk pace: Only two of the 11 tracks here are longer than three-and-a-half minutes. When the final notes of the closer, “Carlota E Carolina (Carly & Carole),” fade out, the listener’s logical options are to start the program over, or dig even deeper into the Deodato catalog with Far Out’s reissue of 1965’s Ataque. That title, like Os Catedráticos, is available on 180-gram vinyl. Bravo!