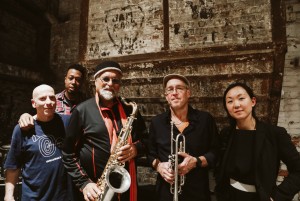 Wayne Shorter continues to glimmer as the lodestar for Sound Prints, a superb combo that excels at trumpeting its honoree’s expansive artistry without losing its own identity.

That’s largely because the copilots of Sound Prints — saxophonist Joe Lovano and trumpeter Dave Douglas — have already cultivated their own respective voices, in terms of improvisation and composing. Bassist Linda May Han Oh, pianist Lawrence Fields and drummer Joey Baron bring the idiomatic knowledge and the improvisational wit required to interact with Lovano and Douglas and make the music leap off the sheet.

Unlike Sound Prints’ previous two albums, the new recording showcases all originals. Still, Shorter’s musical DNA is noticeable throughout, especially in the album’s stargazing theme, in its philosophical undertow and in the mutable dialogue and spatial awareness conveyed by the quintet.

Douglas’ undulating “Pythagoras” sounds as if it could have been included in Shorter’s orchestral Emanon, while still taking full advantage of the trumpeter’s oblique phrasing and Lovano’s flowering passages. Douglas also contributes the luxuriant “The Transcendentalists,” on which he and Lovano issue a beautiful unison melody atop levitating rhythmic momentum.

Other Worlds opens with “Space Exploration,” “Shooting Stars” and “Life On Earth,” a suite composed by Lovano that emphasizes the telepathic push-pull that marked both Shorter’s longstanding acoustic quartet and Miles Davis’ mid-’60s quintet. Sound Prints, however, engages in an open, improvisational freefall toward the end of “Space Exploration,” then gradually issues fragmented melodic pieces on “Shooting Stars,” embarking on a loose excursion that differs from Davis’ or Shorter’s flights of fancy. Things coalesce brilliantly on the driving “Life On Earth,” on which Fields delivers his most wondrous improvisational moment on the disc.

Other highlights includes Douglas’ “Antiquity To Outer Space,” featuring some splendid arco bass from Oh, and Lovano’s suspenseful “Midnight March,” which finds the connective tissue between Shorter and Ornette Coleman. Indeed, Other Worlds simultaneously applauds Shorter’s legacy and cultivates one of its own.