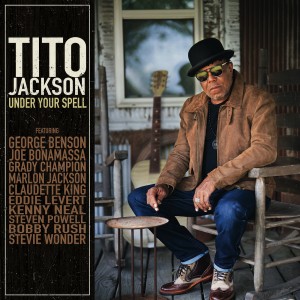 Since the time of Jackson 5 mega-success, Tito Jackson has managed a low-key solo career, whose high point is the pop/r&b album Tito Time (2016). His new release Under Your Spell is another modest blues/r&b triumph.

Jackson’s singing has diminished in strength. He’s intuitively soulful, though, and puts across songs written with co-producer Michael K. Jackson (no relation) or borrowed from others. He acts the role of an imploring peace-seeker in the funky stomp “Love One Another,” supported by blues notables Bobby Rush and Kenny Neal, and Steve Wonder on harmonica. Modernizing the B.B. King classic “Rock Me Baby,” Jackson does some of his best guitar work before deferring to George Benson, Wilbert Crosby and Michael Lee. B.B.’s daughter Claudette does the sensual singing.

Jackson lured sould men Kenny Gamble and Leon Huff out of retirement on “All In The Family Blues.”

Here blues saxophonist Eric Demmer and estimable O’Jays singer Eddie Levert stand out with their unfaked passion. Still another guest, guitarist Joe Bonamassa, flexes his muscles a little conjuring “Under Your Spell.” Tito’s cousin Steven Powell delivers a rap in the catchy r&b number “I Got Caught,” while musicians-arrangers-producers KT and Rocc Thomas steer Jackson through their melodic cheating song “You’re Gonna Push Me Too Far.”