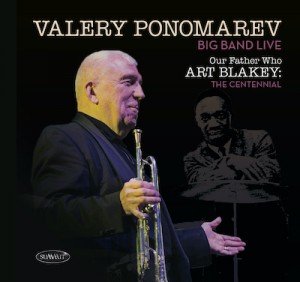 In Jazz Messengers folklore, a number of trumpeters followed in the frothy wake of Lee Morgan and Freddie Hubbard, including a young Russian who held the chair through the end of the 1970s, giving way to a rising Wynton Marsalis. Valery Ponomarev’s bebop-fluent emanations fit like a glove within the Art Blakey criterion, and the drummer became a father figure to the young man. Blakey would have celebrated his 100th birthday in 2019, and for the occasion, Ponomarev put together a band to perform large-ensemble versions of Messenger classics, arranged by the trumpeter. There are a number of places where the live ensemble isn’t quite together, though, and issues of intonation (especially in the trumpets) are evident. Crowd pleasers like “One By One” are faithful representations of the source material, more reincarnation than reimagination. The tour de force is Ponomarev’s take of “Caravan,” moving through the epic chapters of Hubbard’s version, down to his challenging counterpoint on the bridge. At 76, Ponomarev still plays and leads with fearless gusto, a trait he likely gleaned from Blakey.